Your Primary Key to Investment Success:
Avoiding the Big Losses

The world is a dynamic place, not a static one. Your investing, therefore, should be a dynamic process. 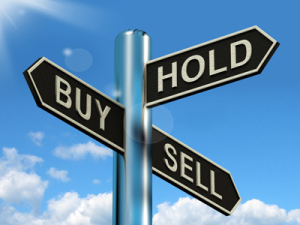 Our HedgeFolios don’t take the “buy and hold forever” approach. The goal is to have plenty of cash during big declines and bear markets, and then be able to invest for the next rise or bull market near the bottom. In fact, our strategy is designed to enable the investor to profit from big declines, utilizing the inverse ETFs.  Using a sector timing & allocation strategy, it’s possible to maximize exposure to the strongest sectors, and, when appropriate, effectively short the weakest sectors via inverse ETFs. This is exactly why the program is called HedgeFolios.

That means that during bear markets, you may actually be making profits rather than losing your shirt or your life’s savings.

How to Profit During Bear Markets

Using advanced technical analysis, we usually get “sell” signals on each investment before painful damage is incurred, and “buy” signals when a sector or index begins to rise. The signals don’t have to catch exact tops or bottoms (although sometimes they do), but they offer a drastic improvement to your investment strategy over the common “buy and hold forever” approach.

We don’t believe that taking the 5-10 year “buy and hold” approach, and riding through a 50% portfolio loss, is defensible. If this happened to you in 2008, you know it’s time for a change.

When selecting an advisor, performance during a bull market usually looks good. As the saying goes: “A rising tide lifts all boats.”

Often, advisors state their performance numbers by simply including their good years of outperformance, while minimizing their bad years of underperformance.

We believe it’s more important to understand how investment advice performed during the big plunges, crashes, crises like 1997-1998, and devastating bear markets, such as 2000-2002 and 2007-2009. Those are the important performance numbers. Bert Dohmen’s advice during these times helped our members not only avoid big losses, but even profit during the turmoil.

Here is an example of how “market timing” can produce big differences in investment performance.

Most investors think that the way to big investment profits is to try to catch the big winners. However, the smartest investment professionals agree that avoiding big losses will help you achieve superior long-term investment results.

Here is a chart of how a theoretical $100,000 investment would have performed over 20 years under three different scenarios:

Obviously, the latter two strategies require market timing. The “buy and hold” strategy would have grown $100,000 to about $320,000 over this period. However, if you had missed the 10 best days, that performance would have reduced the performance to $140,000.

Many “buy and hold” money managers use that example to show that you should not try to “time” the markets.

However, now look at the upper line which shows the performance obtained by avoiding the 10 worst days. Your $100,000 would have grown to an amazing $700,000.

This shows why market timing is so important. You don’t have to catch the exact bull market tops in order to miss the 10 worst days. You only need to catch the major downturns and upswings in order to avoid big losses and profit instead. With HedgeFolios, our expert research and analysis will help identify these major market moves to ensure your portfolio is properly positioned.

How Market Timing Can Work for You 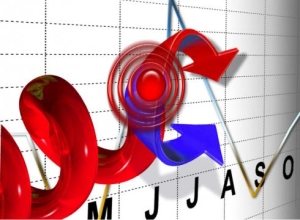 Recent history shows how important “buy” and “sell” signals from Bert Dohmen could have significantly improved your investment portfolio with just a few trades over the past 2 decades.

Let’s look at the S&P 500 index. It made a top in the year 2000, followed by a big bear market. Getting out anywhere near the top, even within six months, would have allowed you to preserve the profits of the prior bull market. The “buy and hold” approach, so often heard from Wall Street, would have caused you to lose your profits and likely suffer devastating losses as well.

The index recovered and got back to the 2000 top in 2007. Getting back into the market near the bottom in the year 2002, using the cash you would have earned from selling near the top in 2000 would have provided you with great profits.

That was followed in 2008 by the most devastating financial crisis since 1929. Getting out on October 13, 2007 when Bert Dohmen called it a bull market top (within 2 days of the S&P 500’s peak) would have saved you a fortune.

The low of that bear market occurred on March 6, 2009. On that exact day, Bert Dohmen identified the bottom and recommended that subscribers to his trading services “close out all short positions.” The market recovery started the next trading day. Many of the major indices climbed back to the 2007 and 2000 top. If you had large invested with large cash positions at the bottom, you could have made great profits during that rise.

Summary: there was no gain in the index for 13 years after the 2000 top. Considering the erosion in purchasing power through inflation, the real loss for the investor was substantial. Here is the chart of the S&P 500 from 1995 to the end of 2013. This shows some of our major market timing calls that helped our clients to profit and avoid big losses.

This explains why market timing is so important. You don’t have to catch each turn precisely, but capturing the major upswings and downturns will still make you much more money than the lazy “buy and hold” approach Wall Street brain-washes you with.

Wall Street promotes the fiction that “no one can time the markets.” The above chart shows how Bert Dohmen has done it consistently for over four decades.

Bert Dohmen’s track record over the past three decades demonstrates that it is possible to time the markets. In fact, he has called many important market tops, often within 1-2 days.

Our HedgeFolios program is based on a very successful membership service from our related firm, Dohmen Capital Research, known as Private Portfolios.

Bert Dohmen’s Private Portfolios service has kept members safe during the big declines and helped them to profit during the strong rises. Clients not only avoided all the major market meltdowns, but profited from them. That includes the big bear market of 2000-2002, as well as the devastating crisis of 2007-2009.

In fact, during the global crisis of 2007-2009 Private Portfolio clients were advised to buy five inverse ETFs on September 4, 2008, just before the big meltdown.  These ETFs soared on average 72% in just 6 weeks’ time during the crash.

Inverse ETF Performance During the Crash of 2008: 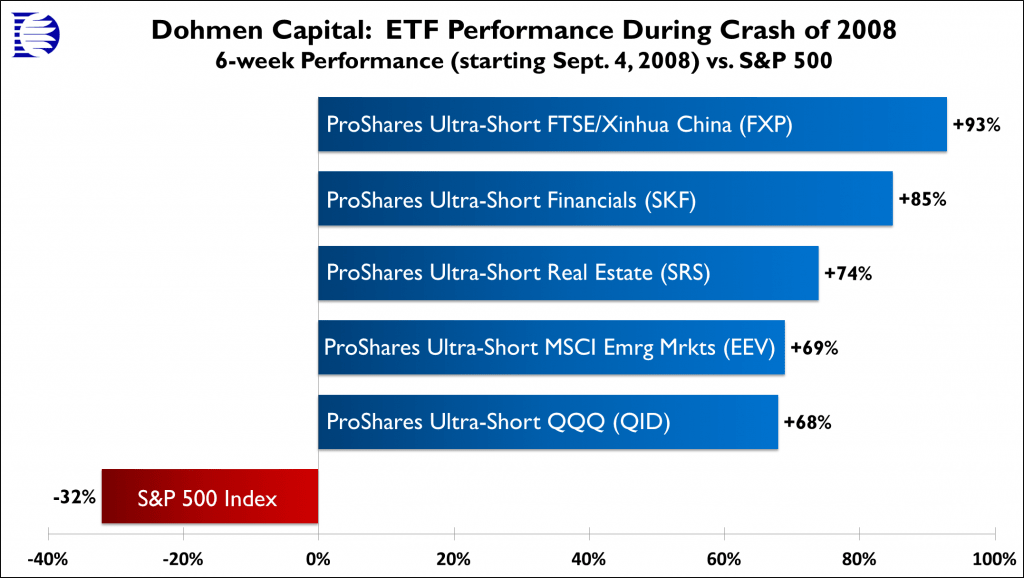 The above shows the advantages of timing the broader stock market. Even better performance can be obtained by timing individual sectors. The most popular stock market sectors, those mentioned by all the analysts you see, hear, or read in the media, usually have strong declines even while the broader market may still be rising.

A good example is the precious metals sector from 2011 to 2013. Everyone thought that because of huge money creation by the Federal Reserve, the value of the dollar would plunge. That, in effect, would cause gold and silver prices to soar. In reality, the precious metals had the worst decline in several decades. Many mining stocks declined over 60% while the broader stock market soared.

Bottom line: timing the various sectors is very important. It is our specialty and area of expertise, using advanced technical analysis. You don’t have to know anything about technical analysis, however, to become a member of our HedgeFolios program. We will conduct the research and analysis needed to attain superior performance and provide you with our guidance. Just watch for our signals and see your portfolio grow.

2. Materials provided on or through this website are for general information only and do not constitute investment advice. Under no circumstances does Dohmen Strategies, its affiliates, or their employees render advice or recommendations concerning the nature or the potential value or suitability of any security, transaction, or investment strategy for any specific investor. Dohmen Strategies recommends that you consult with your tax or financial advisor with respect to your individual situation.

3. Any financial information that may be provided on this website has been independently obtained though sources believed to be reliable. Nonetheless, such information may contain inaccuracies, errors, or omissions. Dohmen Strategies and its affiliates, and their employees, information providers, and content providers, shall not have any liability to you or third parties for the accuracy, completeness, timeliness or correct sequencing of information available on this website, or for any decision made or action taken by you in reliance upon such information, or for the delay or interruption of such information.

4. Links to websites that are not controlled by Dohmen Strategies or its affiliates are provided for your convenience only. You access these websites at your own risk. The information available at these websites has been produced by unaffiliated third parties and, while deemed reliable, Dohmen Strategies and its affiliates cannot and do not guarantee the timeliness, sequence, accuracy, adequacy, or completeness of such information and make no warranties with respect to results to be obtained from its use. Any opinions or recommendations expressed therein are solely those of the third-party information providers and are not Dohmen Strategies' opinions or recommendations. No endorsement of third-party products, services, or information is expressed or implied by any information, material, or content referred to or included on, or linked from or to this website. Under no circumstances should the information be construed as an offer to sell or solicitation of an offer to buy a particular security.

5. Dohmen Strategies is not responsible for (1) technical, network, telephone, computer, hardware or software malfunctions of any kind; or (2) inaccurate transmission of, or failure of Dohmen Strategies to receive, information due to technical problems or traffic congestion on the Internet or at any website or any combination thereof.

7. You alone are responsible for the confidentiality of your username and password. You agree to immediately notify Dohmen Strategies if you know, or have reason to believe, that someone has used your username or password without your authorization.

8. You agree that the laws of the United States of America and the State of Nevada, without regard to principles of conflict of laws, will govern this agreement and any dispute of any sort that might arise between you (or your agents, successors, heirs, devisees, personal representatives, or assignees) and Dohmen Strategies or its affiliates. You further agree that any such dispute shall be held before any state court of Nevada or the United States District Court for Nevada.

9. This agreement relates to your use of this website and your relationship with Dohmen Strategies, LLC. By signing up to become a member of the HedgeFolios program, you understand that you are responsible for your own investment decisions and actions. Dohmen Strategies, LLC does not provide personal investment advice specific to any single entity's financial circumstances.

We are dedicated to protecting your online privacy. We do not sell EMAIL ADDRESSES of our customers to outside companies. If this policy should ever change, we would request your permission first. In these cases, we would always give you the option not to receive these email solicitations or to “opt-out”. We do not sell information about our customers to third parties. We are committed to protecting all of the personal information that we collect and do not distribute this information to third parties without your consent. Any email address provided by the visitor is kept strictly confidential. We conform to all state and federal laws regarding this issue.

This is an impersonal advisory service. Dohmen Strategies LLC is not a registered investment advisor as defined because it does not give “personalized” investment advice. No consideration can or is made toward an individual’s financial circumstances. Each member will decide whether to utilize their commendations and investment selections contained in HedgeFolios. All recommendations and materials provided to members are copyrighted, with all rights reserved, and for personal use of the member only. Financial planners or investment professionals who wish to use this service for their clients’ portfolios should inquire about a site license or multiple subscription discounts.